What are Fascia & Tensegrity? 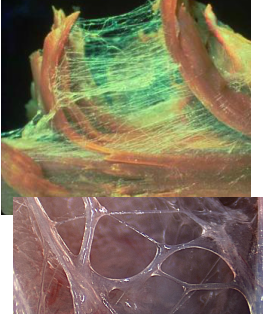 ​Fascia
Fascia is a form of connective tissue. It binds the body together in different layers, and then organizes it into a whole, maintaining a consistent form for the structures within the body. It is a very tough and fibrous tissue which surrounds and interpenetrates every muscle, bone, nerve, blood vessel, as well as all of our internal organs including the heart, lungs, brain and spinal cord. The most interesting aspect of the fascial system is that it is not just a series of separate coverings, but rather one continuous structure that exists from head to toe without interruption. In this way you can begin to see that each part of the entire body is connected to every other part via the fascia.

This creates a web of support that facilitates (or inhibits) your body's ability to move, as well as the ability of your organs to function properly. The fibers of this web line up based on lines of force in the body, meaning that dysfunction and trauma can cause the fibers to become disorganized, which prevents optimal movement and function within any area of your body.

Healthy fascia is elastic and pliable, stretching and moving without restriction. When one experiences trauma however, the fascia loses its pliability. It becomes hardened, dehydrated, shortened and a source of tension to the rest of the body. Often times, unhealthy fascia adheres to itself and other structures (similar to the way plastic wrap works), binding the anatomical structures within you, and thus limiting each of their ability to function properly. This can be caused by a number of factors:​​
Trauma has a cumulative effect on the body. The changes trauma causes in the fascial system influence the comfort and function of our entire being. Fascial restrictions can exert excessive pressure causing all kinds of imbalances and pain, affecting our overall flexibility and stability. They are also a determining factor in our ability to withstand all forms of stress as well as perform daily activities with ease. When your fascia shortens, it will adopt less-than-optimal patterns that pull your body out of alignment, thereby causing “dis-ease”, malaise, chronic pain, tension, rigidity, and a host of other symptoms.
​"Since the spine is a mechanical structure, investigators have used mechanical models to attempt to study spinal kinematics and kinetics. Until now, all models, mathematical or actual, have been based on the axial-loaded compression support system. The problem of such a construct is that they are unidirectional, so that, like a ‘stack of blocks,’ or the Great Pyramid, they would be pulled apart by the very forces that were conscripted to hold them together if tilted out of plumb. The mechanical laws of leverage that operate in the compressional system would create forces that far outstrip any strength of biologic materials. We could not use such a system to walk on our two legs, crawl on all fours, walk on our hands or stand on our head, with the addition of tensional forces to hold us together. Such as system is only as strong as its weakest link". -Levin
Copyright 2010-2020 - The Fusion Bodywork logo, forms & documents, as well as all therapist and studio images contained within this site are the copyright of Fusion Bodywork LLC. Copying and other use, of any of these items, is not allowed. ​Trademark 2012-2020 - The term Fusion Therapy® is the registered trademark of Jennifer Jackson.
​​﻿Insurance & Payment Information                Non- Discrimination Policy               Medical Disclaimer                 Privacy & Legal Statements