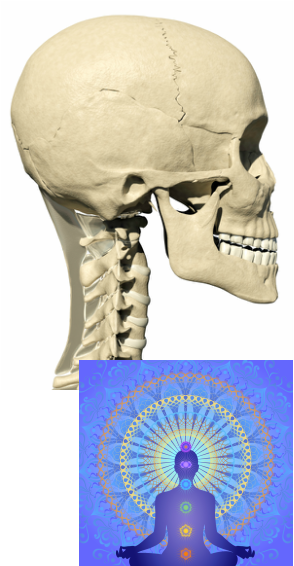 Your Cranialsacral System produces a rhythm, similar to your Cardiovascular System. This rhythm is called your "Cranial Rhythm", and it can be felt by gently palpating several areas throughout your body. This is because as the spinal nerves exit the dural tube, the fascia surrounding each nerve blends with the fascia it encounters upon exiting the vertebral column. That fascia then blends into the fascia of your entire body, carrying that rhythmic pulse outward.

It is still a mystery as to what causes the pulse of the cerebrospinal fluid over the brain, which creates the Cranialsacral rhythm... though there are currently three theories as to its origination;
The majority of our fascial fibers run vertically, but there are some locations throughout the body that have a dense horizontal structure, these areas are referred to as "diaphragms". By working with the diaphragms, the joints of the body and the bones of the cranium to release any fascial restrictions that are inhibiting the flow of your cranial rhythm, you can restore the flow of cerebrospinal fluid throughout your entire Cranialsacral System, which includes the central nervous system (brain & spinal cord) and the meningeal membranes to name a few of the vital structures. These restrictions can be caused by injury or trauma (physical, emotional or psychological), and releasing them has a dramatic impact on the health and well-being of your entire body.
Copyright 2010-2020 - The Fusion Bodywork logo, forms & documents, as well as all therapist and studio images contained within this site are the copyright of Fusion Bodywork LLC. Copying and other use, of any of these items, is not allowed. ​Trademark 2012-2020 - The term Fusion Therapy® is the registered trademark of Jennifer Jackson.
​​﻿Insurance & Payment Information                Non- Discrimination Policy               Medical Disclaimer                 Privacy & Legal Statements